Too Many Plaster Failures 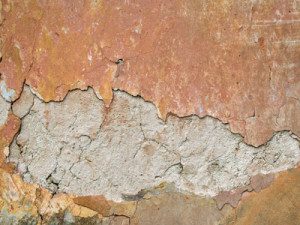 Over the years I have spoken many times about the importance of a quality plastering job. That importance has not waned, and I am unfortunately hearing more and more stories about plaster failures around the world. A large percentage of the consulting work I do is helping clients deal with these plastering issues. There are two common themes, or dare I say causes for the failures. If you avoid these two approaches to plastering your home, your plaster should provide you with a very long life.

If you consider all plaster work over the last say…thousand years, one thing holds true no matter what material you use. The second coat has more sand in it than the first coat and the third has more than the second. That makes the coats “weaker” as they move away from the wall. This is important because plaster moves, as do homes. If the weaker plaster beneath a strong lime finish coat can move more than the finish coat, you will ultimately get delamination between the two coats which will lead to eventual plaster failure. By laying weaker plaster over a stronger finish coat, it will always be able to move at least as much as the coat beneath it. This keeps the plasters well bonded and eliminates the high risks seen in the opposite application. 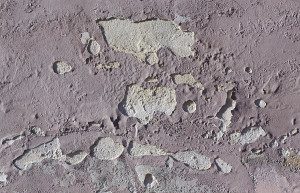 Failure #2: Trapping moisture in the wall. There are two main ways to create this problem. The first is to use a plaster than does not breathe well. For some reason, the use of cement in plaster is still celebrated by some builders. I do not understand this at all. We know that cement based plasters don’t breathe well and we know they are more prone to cracking than lime or earthen plasters. Sure they are stronger, but who cares when they will eventually cause your walls to rot. DO NOT USE CEMENT BASED PLASTERS on a bale home. That is as easy a fix as any.

The second way that moisture gets trapped in a wall is something I see all the time. People decide to use earthen plaster on the home’s interior and lime (or even worse: cement) on the exterior. Those materials all have a different rate of permeation. Let’s consider the most common application scenario: earthen on the interior and lime on the exterior. In any given hour, the earthen plaster will allow 10 units of moisture to enter the wall. During that same hour, the lime will allow 7 or 8 units to exit the wall. The remaining 2-3 units are stuck in the wall and will continue to build up in the straw, leading to moisture trapping issues which are the cause of bale decay.

I very often hear people complain about lime plaster being a bad choice because “they have heard” lime will cause rot in the bales. NO, THAT IS NOT TRUE. What is causing the rot is the overloading of moisture in the wall due to the uneven plaster moisture rates. Yes, there will be rot behind a plaster coat made of lime in this situation, but the lime is not to blame, it is the combination of materials that were used.

To prevent this problem you can either use the same material on both sides of the wall, or you can build up the interior coat to slow down the rate of movement through the wall. This is my favorite option. In the same example, we could simply build the interior earthen coat to 2” and leave the exterior lime coat at 1 1/4”. The added thickness on the interior will slow down the moisture movement through the wall such that the lime can release as much as the earthen will allow to enter in the same time period. Simple fix. 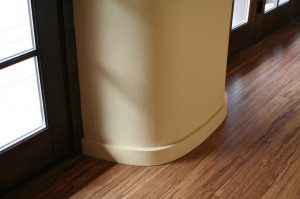 Again, remember that plaster plays a hugely important part of your home. It is not simply a coat of paint over siding. It is the protection your bales need, the beauty your neighbors see, and sometimes part of the structural system that holds your house up day after day. Don’t skimp out in this. What is the point of spending a bunch of money on the framing, plumbing, windows, or any other part of the house only to skimp on the plaster and watch it fail in 2, 5, or 10 years? Ensure that you use high grade plaster materials and that you apply it properly.

If I’m coming across a little strong here, it’s because I care. Want I want is to empower you to make the right decisions so that you don’t have to experience these failures yourself. You can find out how to plaster step-by-step using the practices I’ve used with success for years with my “How to Plaster a Straw Bale House”. Click HERE for more information.