Your interest in building with straw bales places you among the tens of thousands of people who share the same desire to build energy efficient, safe and cost conscious housing. Straw bale construction is seeing a renaissance of sorts all over the United States and perhaps even more exciting: a birth into new areas around the world. No single explanation can be attributed to straw bale construction’s new found achievements; however, a number of characteristics can surely be associated with the success. Whichever reason is driving your interest in straw bale construction, we hope to inspire you to take the next step and build your dream home with bales. 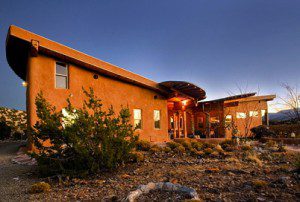 With rising heating and cooling costs, energy efficient homes are becoming more and more desirable. To that end, perhaps the most commonly cited reason for building with bales is the high energy efficiency of the construction method. Consider that a well designed and well built straw bale home can lower heating and cooling costs by up to 75% when compared to a conventional home. This is a significant savings. Although straw bales themselves provide excellent insulation, there is more to the equation than simply stuffing straw into the walls of a house. Quality design and finish is needed for the overall house to perform at its full potential. Structure orientation, floor/ceiling and roof insulation choices, window and door quality, heating/cooling and ventilation systems, and the fine detailing of air penetration all play a role in a home’s performance. Paying close attention to the details during the design and construction of the home will pay off in the long run.

The first semblance of enthusiasm is often sparked by the beauty of the straw bale homes themselves. There is something beyond simply the looks of a straw bale home; something intangible yet palpable about their beauty that continues to inspire people the world over. I have had the pleasure of walking many people through their first straw bale home. In every case, at least one of the people in the party has said something like: “Wow! There is just something so amazing about this space.” Exactly what it is that excites each person varies. Some may be taken by the thick walls, reminiscent of old English castles. Others may be drawn to the window seats and nooks created within the bales. Even the texture of the walls inspire people. To be sure, bale buildings are special and offer something conventional homes cannot. After all, who wouldn’t want live in a home that instills calm and happiness in the owners each time they walk in?

Some people may not be as concerned with what they see as with what they hear and, in the case of straw bale homes, don’t hear. Straw bale homes are unbelievably quiet. The thick walls eliminate most of the sounds of the world outside. If the owners want to hear the birds singing, they can open a window and enjoy the sounds of nature; however, if they live next to a freeway, they can design the building so they never have to sit in their home cursing the sounds of industry rushing past their door. As with the energy efficiency of the home, the sound efficiency is dependant on more than just the bale walls. Most importantly, the design of the home must be thoughtfully planned out to yield the correct balance of sound insulation, natural light and energy design. That said, the simple use of straw bale walls to help insulate a homeowner from the noise of their neighborhood is more effective than any other building material I know.

Have you ever noticed that a home built with regular stud wall construction looks like a home with a lot of chimneys in it before it is drywalled? That’s what stud bays are: a series of chimneys behind a 20 minute fire break made of thin drywall. In other words, the ability of the home to resist fire is in “the hands” of the ½” thick drywall, and that’s it. Yikes! Once the fire breaks through this thin layer, it has access to the entire structure by means of the chimneys created by the studs and sheathing. A fire needs oxygen to burn and in the walls of a conventional home, there is a lot of oxygen available. Many people think that a home built of straw would be at higher risk for fire than a conventional home. In fact, the opposite is true. Homes built with straw bales are extremely fire resistant. A bale home has roughly three times the resistance to fire of a conventional home. If you consider that a stack of loose paper will burn well, but a phone book won’t, you can understand the mechanics behind straw bales and their fire resistance. There is nowhere near enough oxygen in a stack of bales, so they just can’t burn. Not to mention, of course, the fire would have to get through roughly 1 ¼” of plaster before even getting to the bales! In fact, independent testing has shown that plastered bale walls perform roughly three times as well as standard, conventional walls in standardized fire testing.

If you are concerned with the plight of our planet, then straw bale construction holds another gem for you. Imagine the site of millions of tons of straw burning and the smoke that such an event would produce. Sadly, the United States alone produces over 200 million tons of waste straw a year, much of which is burned or discarded into landfills. Rather than burning this “waste” material, we can use it to build with. Why not take a material that would otherwise be turned into pollution and use it to a healthy home? This not only decreases the amount of particulate pollution in the air, but also creates a healthier, more efficient home to live in. In fact, natural building materials decrease the chance of “sick house syndrome” and other diseases caused by the off gassing of common home construction materials such as formaldehyde and materials with high volatile organic compounds (VOC’s).

Although building a home is no easy task, learning to build with straw bales is achievable for most people. The most difficult aspects of building with bales rests on the more conventional elements: framing, electrical, plumbing, etc. The baling itself is something that can be easily learned with the right teacher. To that end, straw bale homes are popular with owner builders because they are fun to build and are a great way to bring friends and family together during the building process. Even if you decide to stay away from the framing, electrical, plumbing and other technical aspects of the construction, you can still play a major role in the construction of your home by raising the bales. For many people, the very idea of building their own home brings them joy. No matter what draws you to straw bale construction, there is something sweet and beautiful about the building process and, of course, the finished product.

In tomorrow’s free e-course,  I’ll introduce you to some design criteria that you will want to know before beginning your project.