A Straw Bale Guest Chalet Vacation in South Okanagan, BC 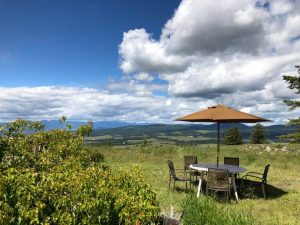 I was sent an announcement today about this two suite, straw bale guest chalet rental in BC Canada. This is pretty interesting and looks like a beautiful area. I’ve been to the Okanagan Valley and it is pretty amazing; however, I don’t think Ive ever been to this location. There is tons to do in Okanagan if you like wine tasting, skiing and other outdoor activities. I like this concept because the straw bale building could potentially turn others onto this type of construction.

When I first started building straw bale homes, I found that the best way to get someone who had never heard of the technique excited about it was to have them visit a bale house. There’s nothing like the feel of a straw bale building and so by letting them experience it first hand, they got an immediate sense of how amazing their own straw bale home could be. I think having people stay in one of the two chalet suites could help inspire them towards living a life surrounded by bales of their own!

So if you know anyone who might be interested in staying in the Okanagan area, on some 500 acres above Anarchist Mountain, please send them to this link so they can consider staying in a green suite rather than a typical house or hotel. It just may be the tipping point for their green living lifestyle change. Here’s the link: www.almightysummitestate.com

Just another cool detail: the property is run on solar power with back up generators (just in case) and the bathrooms have waterless composting toilets. The overall experience is that of a green lifestyle within the comforts of a beautiful home in a gorgeous part of the world. Please do support this type of business if you can. Their rates are also very reasonable in my opinion. Enjoy!