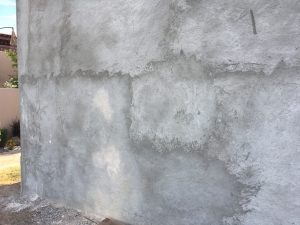 Plaster burn marks may well be the last thing you want to see on your beautiful new straw bale home. Unfortunately, they are easy to make and very difficult to hide. In case you don’t know what I mean by plaster burn marks, you can see an example of what they look like in the photo to the right. Luckily, this photo is not of a finished wall, but of a brown coat that will eventually be covered by a finish coat of plaster. Chances are good that these plaster burn marks will ultimately be hidden; however, only if the final coat’s thickness is enough to cover the underlying textures.

The Cause of Plaster Burn Marks

Knowing what plaster burn marks look like is helpful, but knowing how to avoid them is much more valuable. As such, it’s important to know what causes them in the first place. That culprit is a combination of time, labor force size, and weather. The basic cause is the drying of the plaster before neighboring areas are “feathered” together. As you can see in the picture above, the person who plastered this wall worked in small sections. This is helpful to keep an otherwise seemingly overwhelming task within reach, but the price is high: plaster burn marks. It doesn’t matter how much effort you put into smoothing the two surfaces together. Once the “wet edge” dries, there is nothing you can do to blend the two areas in color or texture. 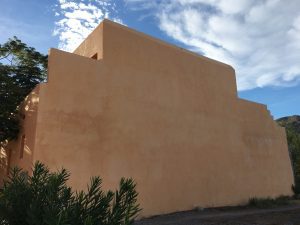 The only way to avoid plaster burn marks is to keep a wet edge as you apply plaster. This is where the size of the labor force comes in. The more hands on deck, the easier it is to maintain a wet edge in every direction. After all, it’s not just the edge that’s growing from left to right, but also the edge that reaches towards the roof and the one that leans towards the foundation. Each edge must stay wet while new plaster is added until it reaches it’s final stopping point. Doing this by yourself is pretty much impossible on a full scale house. Add some warm weather and the drying time shortens even faster, making your job that much harder. 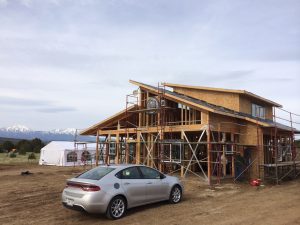 Having the right size crew, the right skills, and the right tools all play an important role in avoiding plaster burn marks. One of the most important “tools” to have on site is adequate scaffolding. Without it, you’ll need to move ladders multiple times on each wall and that will slow things down far too much. Further, a ladder can only hold one person at a time and you won’t be able to refill your hawk safely either. After all, you need to keep three points of contact on the ladder at all times and that’s not possible if you’re holding a hawk in one hand and a trowel in the other. Instead, you’ll need to climb up and down the ladder over and over again to resupply.

Using scaffolding allows multiple people to access the wall at the same time and at different levels. As a result, it’s far easier to keep a wet edge in all directions. It’s also much safer to work from well constructed scaffolding. You can use both hands freely and can place a mud board on the scaffold itself so that you don’t have to make numerous trips up and down to get more mud. In fact, with the right size crew, you won’t have to leave the scaffold at all until the wall is complete.

Keeping moving means you’ll be able to keep a wet edge and that, in turn, means you can avoid plaster burn marks. Another part of keeping moving is making sure that the mud is delivered right on time. That means you need a mixing crew that not only understands the mixing process, but also recognizes the speed at which the wall crew works. If you’re using Natural Hydraulic Lime plaster, the final coat should not be mixed for any more than 5 minutes, maximum. That plaster will also need to be used almost immediately after it’s mixed and it should not sit for more than a minute or two. This means that the crew will need to have the plaster ready for use almost exactly as you’re about to run out of the previous mix; not a minute before or a minute late. Yes, that’s some serious pressure, but you CAN make it work.

One final detail to remember (I mentioned this in other posts about plastering), be sure to thoroughly wet the wall the night before you plaster and once again in the morning before you start applying plaster. This will slow down the drying time of the final coat as you apply it. The more time you can “create”, the better. Protect the wall from direct sun and wind as well in order to slow down the dry time.