Having built hundreds of straw bale houses over the years, I’ve learned that bale stops do an incredible job of both strengthening and simplifying a build. I use them in every bale structure I work on. The most common placement for bale stops is at the top of the wall so that I can compress the bales underneath them and tighten up the entire wall system. This may be something you’ve already considered adding to your design, and perhaps even learned from my “How-To” video series. It’s important to know that there are other uses for bale stops that should not be overlooked. In this article, we will explore those uses and demonstrate why bale stops are an invaluable tool for any straw bale builder.

The Anatomy of a Bale Stop

Before I start talking about where to use bale stops, it’s a good idea for me to describe exactly what they are. The good news is that this section can be short and to the point because a bale stop is perhaps one of the easiest things to build on the job site. It’s simply a combination of 2×4 stock and plywood. They can be built in place, or assembled on the floor and installed in their final location, whichever is easier for your specific use. I find that assembling them in place is typically the best approach. Place the plywood on the side of the bale stop where the bales are located. You can easily stuff the side with the framing with packed straw. Having a flat and slick surface against which to place the bales is a great advantage, especially sine you want the bales to pack in tightly against the stop; whether it’s at the top of the wall, the middle of the wall, or at the ends of the wall.

You can see an example of a bale stop in the above diagram. Be sure to click on the image to see a larger view. There are two bale stops shown in the diagram. One at the bottom of the floor joists at the first story and one at the roof line of the second story. They are basically the same construction; however, the one at the roof line has some drop soffit framing in place as well to ensure the right level within the wall. They are not called out as bale stops in the diagram but rather identified with their framing details (2×4 nailers and plywood). There is another diagram at the bottom of the article that shows vertical bale stops as well. Once again, click on the image to get a better look at the details.

As I mentioned above, I always install bale stops at the top of my walls so that I can compress the bales beneath them. This allows me to tighten up the bales in the wall and create really strong wall assemblies. This is important for so many reasons. First, if your bales are not stacked tightly, you won’t be able to straighten them with a tamper very easily. Loose walls have a tendency to bounce back when hit. Let’s say that you need to move a bale on the fourth course OUT by a couple inches to meet the plane of the wall frame. At the same time, you need to move a bale on the sixth course IN by three inches to maintain a straight wall that lines up with the structural frame.

If your walls are soft, you can hit the fourth course, but the rest of the wall will move with it. As such, you’ll never gain the separation you need to straighten the walls and will instead simply waste your time pushing the whole wall back and forth. On the other hand, if your walls are compressed under a bale stop, a hit on the fourth course will move the bales in that immediate area, but not the rest of the wall. As such, you can hit the fourth course out and the sixth course in with relative ease, creating the flat plane you want for a professional looking bale wall.

I always recommend that the bale stops at the top of the wall be installed 2″ to 4″ lower than the overall stack of bales, depending on what type of straw you’re using and how dense the bales are. For example, rice bales are typically very dense and only require a couple inches of compression to really tighten up the wall. Wheat bales tend to be less dense and so a total of 4″ is better when using them. The goal is to create enough compression once the top course is forced into position that no further mechanical compression of the wall is necessary. For more information and guidance on how to strengthen your walls through compression, check out this article.

Another advantage of bale stops in this location is that they seal up the top of the wall from any rodents that may find their way into the attic. If you were to place bales simply against the rafters or trusses and leave them open to the attic, there would be lots of risk of failure. Rodents are the obvious issue, but moisture migration and fire risk are also increased in this scenario. A simple bale stop puts an end to all of those risk factors.

When building tall walls, anything over 15′, it’s easy to see how a loose stack of bales can quickly become unstable. Throw a strong wind at the wall during construction and you may end up with the whole thing in a pile on the ground. This is not only the opposite result of what you’re after, but also dangerous for anyone standing nearby.  It’s not uncommon in today’s designs to have living areas with vaulted ceilings, and thus tall, freestanding bale walls. Rather than trying to run those from floor to ceiling, install a bale stop at the 10′ mark (or whatever makes sense with your design near that level). You can tighten up the bales below that platform the same way you would in a regular wall, and you then have a solid platform from which to finish the wall off to the ceiling.

Be sure to secure the interior face of the bale stop to the ceiling with temporary 2×4 framing so that it doesn’t lift upwards as you compress your bales underneath it. Once the bales are installed tightly to the ceiling above the box, you can remove the temporary braces, leaving the whole wall tight and exactly where you want it. This type of bale stop is a bit more “beefy” and may be considered more of a box beam than a simple bale stop; however, it serves the same purpose. By beefy, I mean that it’s an actual free standing framed box. I typically use 2×4 framing on 2′ centers with plywood on top and bottom. Be sure to insulate the box before you close it up. My preference is to insulate with rock wool as it’s stable, water resistant (not that it should ever see water mind you), easy to work with, and an environmentally sound choice.

Although most people build houses with right angles, there are those that want something a little more interesting. For those individuals, octagonal may be the way to go, or perhaps something even more unusual. The “problem” with a design like this is that it’s really hard, if not impossible, to tie intersecting walls together while maintaining a running bond or interlaced corner. Without that detail, the corners are weak and the whole assembly suffers. Placing bale stops at the end of each run creates isolated walls, simplifying the build, and strengthening the entire structure. The space that’s left in between the two bale stops can be stuffed with straw and then wrapped with wire mesh and plaster. One completed, there is no sign of the bale stops and no weak point in the structure from an insulation or structural perspective.

When installing the bales in between the vertical bale stops, be sure that they fit tightly, but not too tightly. A common mistake I see is people thinking that tighter is always better. That’s actually not true. If the walls are packed too tightly, the stress of that horizontal compression will find a way to relief; typically by bowing the wall out of plane. Fixing a wall with this problem is not that hard (you simply remove some straw from each course until the bowing stops), but it’s something that you shouldn’t need to do if you pay attention during your bale installation. A good way to remember this is: “pack ’em tight, but don’t make ’em fight.”

I don’t like installing plumbing in my bale walls. We all know that water and straw don’t play well together. One detail that I never understand is when people choose to install a shower right up against a bale wall, with the plumbing lines either in the wall or up against it. To me, you’re just asking for trouble. Instead, isolate the plumbing, and the shower, from the straw by using bale stops. A simple set of bale stops on either side of a shower unit can keep the straw away from the water source, reduce any risk of damage to the bales, and even buy you floor space in the bathroom.

Note in the image how the isolated shower unit fits “into” the bale wall and thus adds square footage to the bathroom. The framed wall behind the shower can be insulated with natural, “standard” insulation like rock wool for an energy efficient and simple wall. Once plastered, you’ll never know the difference between the straw sections and the framed section. It’s “cheap insurance” for a beautiful straw bale home that will last for years to come.

As you can see, there are lots of places where the installation of bales stops can aid in the construction of your straw bale house. The goal is always to build a healthy home that will last for generations, and adding bale stops is one way to insure that that happens. Some purists feel like the addition of bale stops takes away from a “true” bale home. I’m not that guy. To me, I want something that will last forever, is easy to build, is energy efficient, and makes sense. Doing something to its purest form is not always the best solution or approach. Doing something that makes sense on many levels is how I choose to roll. 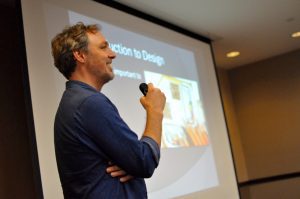 Make sure that you plan the location of your bale stops before you start building. Having a solid design and set of plans will help you beyond measure in the construction of your home. I always say that it’s much easier to make changes on paper than it is to make them in the field. It’s much less expensive too! If you see places on your plans where you can tell in advance that a bale stop will improve the process, mark it on the plans. Be sure that your builder is aware of how to use bale stops and where to put them. If you’re interested in learning more about how to use bale stops and the overall design process for your bale home, I hope you’ll join me in Ashland, Oregon on August 10-11, 2019 for a two day design class. As I’ve said, getting the details right on paper will save you loads of time and money on your build.