The Ultimate Hole Saw for Drilling Through Straw Bale Walls 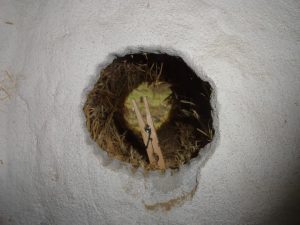 A reader wrote in some time ago about a hole saw he created to drill through an existing straw bale wall for a vent pipe for a new hot water heater. The wall had been in place for eight years already, so the plaster was hard and fully cured. He needed the hole to be straight and clean and did not want to do a lot of plaster work to hide any new construction (or destruction). He came up with a great solution and I want to share that with you all as I think it’s something others may want to do in the future. Thanks to Dick A. for letting me share his idea/solution.

Dick didn’t come up with a name for his invention, but I like to call it the “Bale Stabber”. Okay, I literally just made that up as I was writing because I felt like it should have a cool name. If you have a better name, please let us know in the comments below. Dick used materials that are readily available at any local hardware store. He chose to buy his at Harbor Freight because, quite frankly, they have a bunch of cheap stuff and if the idea didn’t pan out, he wouldn’t be out a bunch of cash. Knowing now how well it works, I would suggest buying your materials at a store you want to support in your local community. 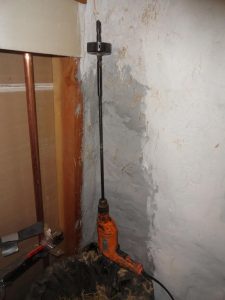 So here it is, the Bale Stabber!!! As you can see from the photo, it’s a really long drill bit with a hole saw welded onto the end. It may seem simple (and in truth, it kind of is…now that he figured out the nuances), but it is a hell of an invention for the task at hand. For example, Dick learned through trial and error that the bit/hole saw did not work well in the forward direction. It seemed to chew up the straw rather than cut through it. He had a solution though, sharpen the chisel teeth to a knife point and run the drill backwards. Again, better that he did the leg work on this one than for us to all try to figure it out again on our own. 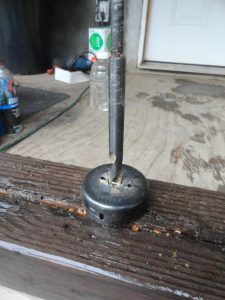 Let’s look at the process he used to create this cool tool. First he drilled the hole saw part way into a piece of wood. This helped him hold the bit steady and keep it square so that he could weld the rod in place, making sure that the whole assembly would turn properly and not wobble. This is a crucial detail as a bit that is welded off center will not cut well no matter what material it goes into. If you have a lathe that you can turn the bit on, you can check to make sure it’s perfectly centered before you start your job and, if not, you can make adjustments along the way. I had a chance to watch a guy do this for me in Mexico last year when I needed to make a similar extension for a drill bit. It was fun to watch him turn and “adjust” (read; smack with a hammer, perfectly timed, as the steel rods turned on the lathe). I thought for sure there was no way he was going to be successful; but in the end, I had an amazing, extended drill bit; and all from scrap metal in his yard for the low, low price of $2! 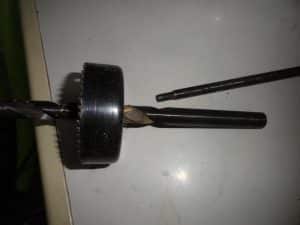 You may need to use more than one rod, depending on how thick your bale walls are and how long of rods you have access to. Be careful to check the thread direction when using multiple sections with threaded connections so the bit assembly doesn’t unwind itself inside your wall. In fact, Dick recommends spot welding the threaded sections together so that they can’t come undone. For some of the longer rods, they don’t make a solid core version so you are required to go with threaded sections. 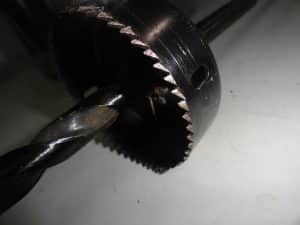 As I mentioned above, the hole saw worked better in reverse with the teeth sharpened to a knife point. The sharpening gave the teeth a double cutting surface which produced a much cleaner cut through the plaster and the straw. This was especially important in the straw as the forward cutting motion he originally tried made a huge mess as it pulled the straw and chewed it up, rather than cutting it. He used a grinder to sharpen the teeth, which takes a steady and consistent hand. If you have not done this type of work before, be sure to practice on something of lesser value before going for the whole enchilada. Further, be sure to secure the hole saw in a vise or some other contraption so that it can’t move while being sharpened. You don’t want things jumping around when running a grinder at high rpm against sharpened steel teeth!

If you have mesh behind your plaster, you need to be careful as you approach it with the drill bit. Chances are it will not be happy to encounter the mesh and it may cause the hole saw to bind up or worse yet, twist your wrists. Whenever working with a strong drill, it’s VITAL that you brace the drill against twist. It’s not uncommon to hear of people literally breaking their wrists because a “Hole Hawg” or “Right Angle Drill” bound up and kicked without being braced. These drills are amazing, and I highly recommend them; however, only if you know how to use them. The torque is so high on those drills and the speed too fast for you to be able to react in time should it kick. The drill binds, the torque keeps turning, and your wrists become the breaking point! Consider the direction of turn and brace the handle against the wall or something else that is strong enough to stop the rotation should it come to that. But I digress…when you get to the mesh, pull the drill out and use nippers to cut the mesh away before continuing with the hole saw.

Be safe, have fun and…Happy Holes Everyone!!!