Last week I was teaching the last seven day workshop of the year in Grants, New Mexico. The town of Grants is not that amazing, in fact, it looks like hard times may have set in some time ago. The surrounding area on the other hand is amazing. The natural and cultural history of the area was fascinating. Of course, I did not get to see much of it as I was busy teaching the 27 people who where there to learn the details of straw bale construction.

I knew things would be different in this amazing part of the world the moment I arrived on site. On the neighboring property there is a beautiful Buddhist Stupa. When I arrived, there were roughly 300 people from all over the world taking part in a consecration ceremony for the new Stupa. The following morning, the Lamas performed a fire puja for teachers. This was a great honor and to be included, at what ever level, as one of the teachers honored by the ceremony was extremely humbling and an amazing experience. The puja was amazing and many great offerings were given to the fire. What a start to an amazing week. 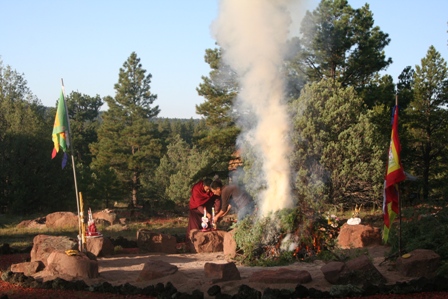 As we moved through the process of building the cottage for a wonderfully kind man in the Zuni Canyon named Kent, we found ourselves playing in the rain almost everyday. The thunderstorms came in each afternoon and dropped rain and hail on us. Not the typical weather for a straw bale workshop in New Mexico, I must say! That said, it made for some beautiful light shows in the evening as we tried to stay warm around the fire. Of course, from time to time, the rain would chase us from the fire circle, sometimes for the night, others for only 10 minutes or so. 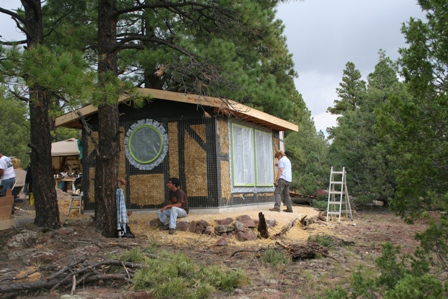 Even with the weather, we managed to finish the workshop by completing the plaster on the inside and outside of the beautiful “Sunset Cottage.” The building turned out great, especially with the artwork of Kokopelli adorning the entry way to the cottage. This was provided by a wonderful Navajo woman which was truly the blessing on the cottage for Kent. What a wonderful experience the whole week was. I hope you can join me next year. I already have hosts lined up for all but three of the 2010 dates. I’ll be posting the full schedule soon at www.StrawBale.com/store. Stay tuned for more on the upcoming season.