A Designer’s Perspective on Straw Bale 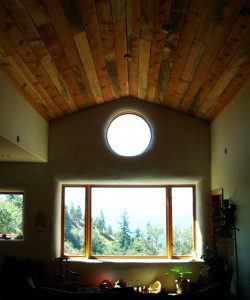 As I enter my fifth year as a designer, my mind seems to continually bring me back to the same question – Why Straw Bale? On the surface, there are all of the obvious reasons that answer this question. First, there is the act of diverting an overly abundant, otherwise waste product, from either the air, via burning, or the earth, via the land fill, and using it to create a super-insulated efficient shelter. Then, with the situation with the world’s forests, there is a considerable decrease in the need for so much wood.

Many folks in the construction field will say that nowadays with all of the technological advancements around building materials, raising a building is getting quicker and quicker. Yet the payoff is a lot of toxic materials that take an invisible or hidden toll on the environment and the people that live within these highly toxic yet time-efficient buildings. There really is something about having a raw, natural, and copious material making up the bulk of your home. In my mind, it can act as a sort of catalyst that brings us back to our natural center. The same center that we are constantly knocking ourselves off of each day with things like over-working, addictions, conflict, you name it. What I mean is, it is a home. It is where we sleep, where we rest and rejuvenate ourselves to wake up and take on yet another day.

Three years ago I made a decision to move exclusively into straw bale design. At the time I thought it was a really cool idea. It was a niche that very much blended with my philosophy. As well, it was the most viable, simple, elegant and ecologically sensitive alternative to conventional construction that I could imagine. And to top that, it wasn’t the norm, and therefore by my definition, it was truly innovative. As a designer as a human, that hits me deep. It speaks to what I feel is the essence of being human; being present and aware of our situation and striving and searching for the next and better place to be. I think that everybody embodies this essence, although some are aware of it more than others.

So, presently, as I am embedded deep in the field, I still think it is a cool idea. It is a blooming field that has a wealth of experience and even larger possibilities. The family of builders, designers, engineers, and of course home owners, that I have been fortunate enough to meet and be a part of, is a real blessing. It almost demonstrates what I would associate as a tribal community. You see, there is not one way to design and build with straw bales. For the last few decades, many folks have been laying the groundwork, experimenting with new (and old) techniques, pushing the envelope, and meticulously documenting many different ways to move this forward. Just in the last ten years, the techniques and efficiency for designing and building has gone through enormous changes. And much, if not all of this is due to the sharing of information.

There seems to be communal accord that working together and sharing information, will allow straw bale building as a whole to become a real, true, and efficiently knit practice. For me, that speaks to a new paradigm. I can’t say that I have ever met anyone involved in the field of straw bale (builder, designer, and owner) that I would consider cut throat or just out to make a buck. In a world like the one we live in now, I feel lucky to be a part of this movement.

In the 21st century, straw bale building is more becoming synonymous with concepts and phrases like cost effective, ecologically sensitive, natural, and elegant, and less so with earlier ones such as, rustic, hippy, cheap, or labor-intensive. Much of this is due to the countless time and energy that has been expended by builders, designers, engineers, visionaries, scientists, and just plain old folks who choose to live light on the land or those that simply choose to do what just makes sense.

So as I sit here and ask myself once again, Why Straw Bale?…my only response is Why not?

Chris Keefe, from an early age, discovered his creative spirit in art. In 1996, he received a B.A. in Liberal Arts focusing on drawing, Music and Philosophy from San Francisco State University. In tandem, he was actively involved in a grassroots environmental project for five years at the University of California in Berkeley. He became interested in the field of straw bale as he began his graduate studies in 1999 at the San Francisco Institute of Architecture. Focusing to integrate his work in the environmental and sustainability field with his creative imagination, he received a Master of Architecture and Ecological Design in 2001. Soon thereafter, he founded a company called Organicforms Design which offers ecologically and artistically based design utilizing natural and sustainable materials. Since then, he has worked and completed several exciting design/build projects in Southern Oregon. In 2002, he began to focus primarily on straw bale research and design as the lead designer on the innovative project, The Straw Bale Village in Jacksonville, OR. Please visit his website at www.OrganicFormsDesign.com

NOTE: Remember, You’re welcome to “reprint” this article online as long as it remains complete and unaltered (including the “about the author” info at the end), and you send a copy of your reprint or the url to Info@strawbale.com