We Have a National Straw Bale Building Code!

This is perhaps the most exciting day in straw bale construction history. A proposed appendix on straw bale construction was approved at the International Code Council’s (ICC) Final Action Hearings in Atlantic City on October 4, 2013!  The appendix will be included in the 2015 International Residential Code (IRC) for one- and two-family dwellings. This means we now have a national straw bale building code! In case it is not clear exactly what this means and why I’m so excited, let me explain.

The IRC is the basis for the Residential Building Code in virtually every jurisdiction in the US.   So once these jurisdictions adopt the 2015 IRC, there will be a straw bale code for almost every jurisdiction in the United States. No more convincing building inspectors that your idea isn’t crazy. No more wondering if the plan checker will allow you to build the house of your dreams. You will be able to cite the national code and move forward with your construction process, with a permit.

It should be noted that appendices in the IRC are not integral with the body of the IRC, and must be explicitly adopted by jurisdictions using the IRC.  But it is expected that the vast majority will adopt the straw bale appendix because it fills a great need.  Even if your jurisdiction does not adopt the appendix, you could cite it in the NATIONAL model code, which would carry enormous weight, and likely be used as the de facto code.

There are some restrictions within the straw bale appendix, most of which are appropriate for the proper use of straw bale construction; however, others are a bit conservative as a means of gaining acceptance in ICC’s approval process.   The appendix is a living document, and will evolve over time through ICC’s review process every three years. It was an important step to get “in the door” and now we can allow the appendix to evolve over time.

This is a huge and historic step for straw bale construction with far reaching implications. For example, obtaining financing through conventional channels should become easier with the acceptance of straw bale construction into the IRC. Banks’ concerns about structural longevity, fire resistance, moisture issues, etc. are clearly addressed in the code. The same can be said about the insurance industry. These establishments shy away from risk so having the IRC approval will help put lenders and insurer’s minds at ease. That can certainly make the process much simpler for homeowners moving forward. 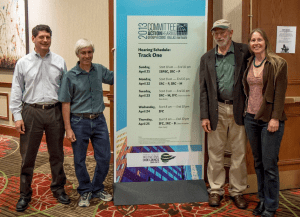 The lead author of the appendix is California architect Martin Hammer. Martin has been working on draft straw bale codes since 2001 for the State of California, the International Green Construction Code, and the International Building Code. But these efforts and the approved IRC appendix were made possible by invaluable efforts and contributions from many other straw bale practitioners and experts.

Moving forward in a continuing effort to increase acceptance of straw bale building techniques in an even wider market, a straw bale construction appendix is expected to be proposed for the 2018 International Building Code (IBC) in January 2015. The IBC governs all structures in its jurisdictions except one- and two-family dwellings which are covered by the IRC.

This would create a path to permits for all residential structures not covered by the IRC (multi family dwellings, for example) as well as commercial and all other governed structures (churches, schools, offices, etc.). In addition, a peer review is under way regarding a FEMA P-695 analysis of the seismic performance of plastered straw bale wall systems. This analysis and review is required for new structural systems in the IBC.

Click on the PDF to check out the straw bale construction appendix in its approved form.   (Note that an effort will also be made to add illustrations and explanations for the 2015 IRC with Commentary)