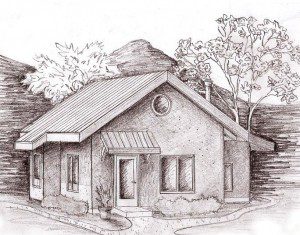 Jill Plumer and David Clark decided to rebuild with straw bales after their home was destroyed by a tornado. They married in 2001 and soon after the joyous occasion, began dreaming up plans for the home in which they planned to spend the rest of their lives. They decided on a beautiful timber framed house design and began the construction process in 2003.

David is a carpenter, and for several years, the couple tenderly built their home, even felling their own trees to create the timber, while living in a trailer on the property to be close to the build. The home was nearly done and they planned on moving into it this fall.

Unfortunately, Mother Nature had other plans in store. On April 27, 2011, the tornado sirens seemed to go all day long. In Chattanooga, where Jill works as Human Resources Director for the YMCA, there were 5 warnings and staff spent much of the day shuttling members down to the tornado cellar. Jill made the decision to stay on site for the night to help remaining, rather than drive the 45 miles home to their property. Upon telling David this, he agreed whole heartedly, noting that it wasn’t worth the risky drive to make it back to their land.

Meanwhile in their trailer home, David lay down to sleep, unaware that life as he knew it was about to change. To say that David’s survival is a miracle is an understatement. In fact, no words can truly describe or explain what happened that night. As a mega EF4 tornado barreled down on their property at 9:28pm, David found himself at the mercy of fate and the paper-thin walls of his trailer. In no time, the roof and walls tore away around him, flying into the surrounding woods and landing as a tangled web of twisted debris.  In the end, the only remaining unharmed object was David.

The tornado passed and David found himself outside in the pitch black of this horrific night, cold and battered by the driving wind and rain that consumed the landscape. During the tornado, David’s emergency flashlight had been tossed into oblivion, leaving him with nothing but the sporadic flashes of the lightning storm to light his way. He was disoriented by the darkness as well as the devastation of his property. He turned in circles, looking for the house they had spent the last eight years building. To his disbelief, he finally realized that he couldn’t find it because it no longer existed. The home lay in complete collapse. The next day they would see that the tornado had been so powerful that it had flung the four principal trusses, each weighing 1.5 tons, up to 50’ from the structure’s original site.

Sadly, others weren’t so fortunate, and that night Jill and David lost not only their dream home but also friends, neighbors, and some of their alpacas. Jill shares that she and David have been affected greatly by this sad turn of events. Going through this experience has been a major turning point for both of them. They are touched and moved by the outpouring of support they have received from people in their small community; people with nothing extra to spare, showing up at their property, chainsaws in hand asking, “How can we help? Where do you want me to start?”

They are deeply grateful for how embraced they have felt and are not taking an ounce of this generosity and kindness for granted. They are even more committed now to rebuild their dream home as soon as possible so that they can start giving back. David and Jill have no intentions of moving away and plan to remain in this amazing community for a very long time.

Since the tornado, the couple has been moving from place to place, staying with friends while they figure out how to rebuild on their land. Recently they stayed with an artist friend, Frances McDonald, in Chattanooga, who is the first person to have built a straw bale home in the area.  Jill and David were so taken by their experience of staying in the straw bale home that Jill says, “There’s no way I can build a conventional home after living in a straw bale for a week!”

They love the look and feel of straw bale construction and are amazed that during their stay, when it was so “beastly” hot outside, whenever they came into the bale home, it was like stepping into a “cool, dry cave.” They’ve been bitten by the straw bale bug and recently contacted us about hosting a straw bale workshop to build the Applegate Residence on their beloved property, which we will do from September 22-28.

There remains a lot of clean up on their land, once heavily forested and now littered with fallen trees. Friends and family are still coming in from out of town to help in the clean up process and slowly but surely, things are getting done.

Stories such as this remind us of the fragility of our lives here in this beautiful and sometimes harsh world, where have no control over the elements and can only rely upon the generosity of friends and neighbors in times of great need. We wish Jill and David all the best and look forward to being a part of their rebuild.

To read a newspaper article that was written up shortly after the tornado about David and Jill’s experience, click here.